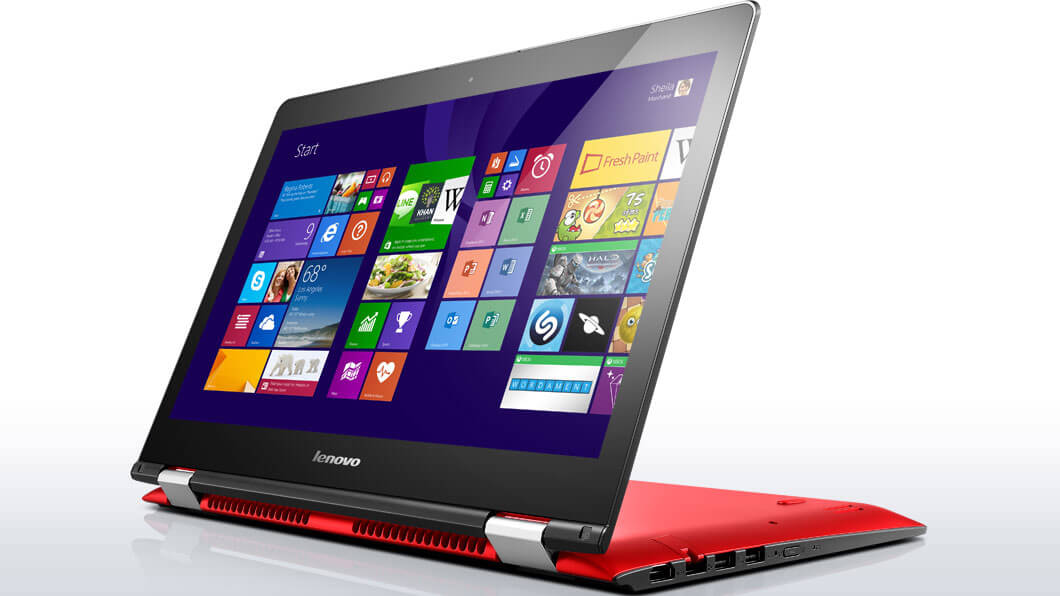 With a premium build quality, 360 degrees hinges and a 6th gen CPU, the Yoga 500 is a force to be reckoned with. However, it does come with some flaws.

Keeping the legacy of convertible Yoga laptops alive, Lenovo offers the Yoga 500 as the ultimate budget hybrid. The Lenovo Yoga 500 is among the latest convertible notebooks, but what sets it apart from the competition is its cost-effective pricing, with no compromise in design. With a premium build quality, 360 degrees hinges and the powerful performance of the latest Skylake Intel processor, the Yoga 500 is a force to be reckoned with. Read our full review below.

The upper tray and the bottom of the Yoga 500 have been constructed out of hardened plastic, which provides a fair amount of stiffness to the base. There is some amount of metal in the casing of the notebook, as the entire keyboard deck has been forged out of brushed aluminium, which delivers a high-quality impression at the very first sight of it.

The silver hinges are not as rigid as they appear, but the metal hinges under the casing are solid and provide stability to move the screen 360 degrees backwards. The bottom of the Yoga 500 does not come with a maintenance hatch, and the battery is encased within the hatch, so the entire bottom casing needs to be removed in order to replace or upgrade any components.

Some of the lovely design elements include a rubberized lining around the keyboard deck, which prevents the screen from touching the aluminium base and scratching it. However, when the Yoga 500 is in tablet mode, the curved bottom chassis of the notebook prevents it from giving a tablet feel. Being 1.8Kg in weight, the Yoga 500 is not the most convenient tablet to carry around at all times.

The Yoga 500 packs a 14-inch touch screen display, with a native resolution of less than FHD (just 1366 x 768). With a pixel density of 112 PPI, the display comes with an anti-glare coating to make it usable under sunlight, which is not of much help. Based on the TN display technology, the notebook’s screen comes with a maximum brightness of 185 cd/m2, which is significantly lower than the 300 d/m2 ultrabook average.

The TN display panel being the culprit, viewing angles are restricted, with minimal fading when tilted more than 45 degrees from the point of sight. When put to test on the sRGB color gamut, the display was able to cover only 56% of the spectrum. However, tests revealed that the screen was spot on in color accuracy with a DeltaE score of 1.72 (close to zero is best). The high contrast of the display makes it ideal for videography and graphic designing.

The Chiclet-style keyboard on the Yoga 500 does not come with backlight illumination, which is a downer for some. The overall layout of the keys is well-spaced, with flat keys that have been given a slightly concave shape for a more ergonomic feel. Although the keyboard does not match the excellence of the ones equipped with the ThinkPad, the short travel and snappy keys make it pleasant for typing.

The Yoga 500 comes with a ClickPad, which incorporates the right and left buttons into the touchpad itself. The rather large touchpad measures 4.9 inches diagonally and comes with extensive support for multi-touch gestures. The polished surface of the touchpad looks aesthetically pleasing, while the brushed aluminium around it makes it even more comfortable to use.

Keeping the Yoga 500 up to date, Lenovo has equipped it with the Intel Core i5 6200U processor, based on the latest 6th generation Skylake architecture. The base clock speed of the processor is 2.3GHz, which can be overclocked to 2.8GHz with the Intel Turbo Boost Technology.

The battery-friendly processor is powerful enough to help you run multiple heavy operations at once, without any hiccups. In terms of memory, the Yoga 500 comes with 4GB DDR3L RAM, which is soldered to the motherboard, so there is no room for upgrade. 4Gb of RAM is adequate to run most applications and everyday tasks, but it is not enough and not recommended for things like photoshop or even gaming.

While most of the latest notebooks are expected to house an SSD storage, the budget-friendly tag of the Yoga 500 restricts it to a 1TB HDD storage that runs at 5400 RPM, which is quite disappointing. The graphic capability of the notebooks is rather limited to the onboard Intel HD Graphics 520, which supports 3D applications, but not suitable for gaming.

• Too heavy to be used as a portable tablet.
• No maintenance hatch making upgrades impossible and a non-removable battery.

What makes a convertible better than any run of the mill tablet is the added firepower that only a laptop can provide, and the Lenovo Yoga 500 does exactly that. Admittedly, the Yoga 500 is not the most eye-catching hybrid around, but it is among the most budget-friendly ones currently available in Australia, with plenty of performance-oriented hardware fitted inside.

The low brightness of the screen is a concerning factor, which limits its use to being indoors, and the Yoga 500 does not feel very “tablet-like” when folded all the way back. A lack of an SSD storage drive is another major drawback. However, the Lenovo Yoga 500 is one of the few choices out there for those who are looking for a 14″ convertible laptop on a tight budget.