For those who are on a budget and need the dependable ThinkPad brand name, the Lenovo Thinkpad E550 should be a natural choice 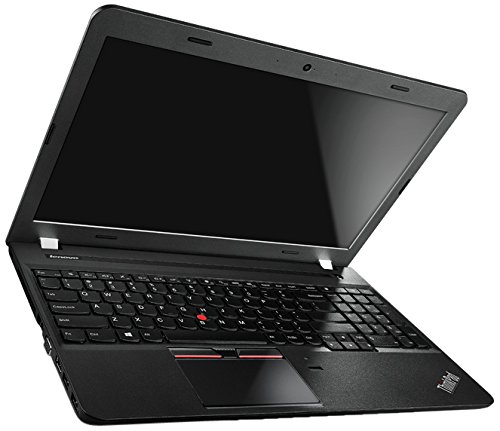 The Lenovo Thinkpad E550 is not among the premium ThinkPad laptops but is a humble business machine with plenty of positive aspects over its competitors. In order to secure the lower range of business laptops, the Thinkpad E550 compromises on the quality of the notebook and limits the processing power to accommodate a reasonable price tag. Read our full review below.

The Thinkpad E550 is encased in a polymer plastic construction, with the same matte-grey finish that is a constant among ThinkPad notebooks. The PC / ABS casing does not come with any metal elements but is able to provide overall rigidity to the laptop.

The surface of the lid does yield under pressure, and the plastic casing does not succeed in keeping the Thinkpad E550 light for travel, as it weighs 2.38Kg, and comes with a meaty thickness of 27mm. Taking the affordable price into the equation, the firm hinges of the Lenovo E550 offer sturdiness for the laptop but are not smooth enough to allow you to lift the lid with a single hand.

While the build quality is durable enough to last a long time, it does not offer the seamless appeal of the other high-end ThinkPad laptops. In terms of Input/Output, the Thinkpad E550 comes with 2 x USB 3.0 ports, a USB 2.0 port, Gigabit Ethernet port, HDMI port, VGA port, DV burner, combo audio jack and OneLink/ power socket.

The cost-cutting measures that have been made by Lenovo are apparent in the display of the E550. With a native resolution of 1366 x 768 pixels, the TN display panel used in the laptop puts in the category of entry-level laptops. The brightness of the display measures up to be 200 nits, which is near the average in its category, and the addition of an anti-glare layer rids the screen of annoying reflections.

A common flaw of the TN display technology is the bluish cast, which is clearly visible on the Thinkpad E550. Even after calibration of the screen, the DeltaE score remains above 10 (closer to zero is best), and the low sRGB colour spectrum coverage of 55.7% makes the Thinkpad E550 unsuitable for professional image editing and graphic designing. Despite the AR-coated display, the laptop is unable to make up for the low brightness and offers minimum visibility under sunlight.

The keyboard layout of the Lenovo Thinkpad E550 is almost identical to that of the rest of the ThinkPad notebooks. However, what distinguishes the keyboard on the E550 from its high-end cousins is the missing backlight illumination. Although the keys are conical and offer a pleasant typing experience with short travel and fluent strokes, they fall short of matching the rich feedback on the keyboard on the T series ThinkPad.

The Thinkpad E550 comes with a Trackpoint and dedicated keys, which do take a while to get used to but make navigation sheer pleasure. One notable difference in the touchpad is that the click buttons have been incorporated into the touchpad itself, which could make the drag and drop function a bit difficult. The overall responsiveness and accuracy of the touchpad is excellent and recognises multi-touch gestures right away.

Our review version of E550 is equipped with the 4th generation Intel Core i3-4005U processor, based on Haswell micro-architecture. The processor runs at a base clock speed at 1.7GHz and does not come with Overclocking capability from Intel. The dual-core processor is based on a power-friendly ULV model, which has been designed to extend the battery life of the system.

Equipped with a single module of 4GB DDR3L RAM, the motherboard has an expansion slot to add more RAM if required. There is no SSD storage to speed things up, but the 500GB HDD at 7200RPM should be plentiful to keep your files and data. Equipped with the Intel HD Graphics 4400, the low base clock is sufficient to run 4K videos with ease but does not offer much in terms of gaming capacity.

• The stiff build quality makes it highly durable.
• The crisp keyboard with concave keys makes it a pleasure to type with.
• Low noise development and cool temperature make it ideal for office use.

Buyers simply cannot expect the Lenovo Thinkpad E550 to reproduce the quality of its high-end brethren, which cost almost two to three times more. The plastic build, a rather inferior design, low processing power and mediocre display in comparison to the expensive ThinkPad notebooks is a necessary evil to cut down the costs significantly.

However, the Thinkpad E550 offers more than what most of the entry-level business laptops do, such as the premium-style keyboard, which should be a selling point for prolific writers. For those who are on a budget and need the dependable ThinkPad brand name, the Lenovo Thinkpad E550 should be a natural choice.