Lenovo does a fine job of offering build quality, one of the best keyboards on the market, and a decent budget hardware configuration, but the poor-quality TN display takes everything down with it.

***Disclosure: As an Amazon Associate I earn from Qualifying Purchases 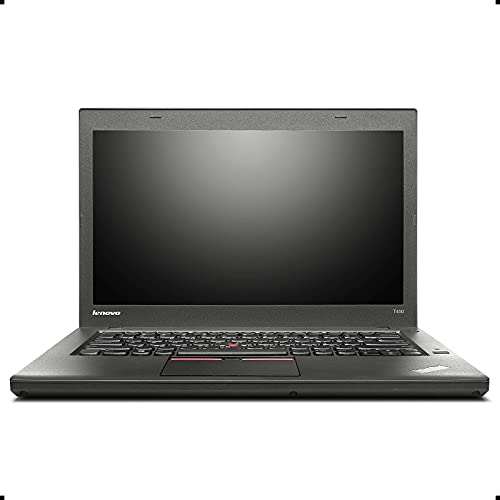 With entirely new lineups of laptops launched every year, the old-time users do wish for something that has stayed constant over the years. While most of the ancient laptop series has been revoked and re-introduced by most manufacturers, Lenovo has kept the ThinkPad T Series alive and kicking since the year 2000.

With the titanium alloy chassis and 14-inch display being constant, the ThinkPad series has seen a long line of successors with quality improvements in every generation. While the ThinkPad has seen modern development in terms of design and features, the T Series has continued to be the timeless piece of technology as always. The latest offering from the Lenovo T Series, the ThinkPad T450 is back with better specs and the same old iconic design. Check out our full review below.

There is almost no visual differentiation between the ThinkPad T450 and its predecessor, the T440, with a similar raven black color overall and a unique rectangular shape. First, look at the T450 is all you need to identify it as the newest member of the ThinkPad T Series, with the same sober and classy appeal that the entire series boasts.

Although the difference is not apparent, the ThinkPad T450 (20bv0020au model) has been constructed out of a different casting material compared to the T440. This makes the laptop sturdier than the older version and more durable as well, weighing 1.73 Kg, which is almost similar to the 13 inch MacBook Pro. When compared to the older T440 in terms of physical differences, the only noticeable differences are the USB 3.0 port and UltraNav touchpad which comes with all the ThinkPad 2015 models.

Although available in multiple versions, the low-cost reviewed version of the ThinkPad T450 comes with a 14-inch display panel like the Lenovo Yoga 500, with the economical TN technology. With a resolution of less than Full-HD (1600 x 900), it is generally regarded as a WXGA++ panel which comes with a standard brightness of 250 cd/m2, a contrast ratio of 400:1 and 131 ppi.

When put through a brightness test, the ThinkPad T450 produced a much lower brightness score (163 cd/m2) compared to what the manufacturer promises. Additionally, the bottom area of the screen is darker than the rest of the screen, which is a common flaw in the outdated TN display technology. The sRGB color gamut came up to 54.5 percent, which is less than desirable, and the screen became blurry when viewed from upper and lower angles.

Since the ThinkPad T450 is made for business, it is essential that it offers the best typing experience, and it delivers exactly that. The Numpad has been designed to offer an extra-spacious keyboard with specially designed keys with 1.9mm (1.5mm- 2.00mm ideal) of travel and 63 grams (55 – 60 grams ideal) of actual force, with a concave design that makes typing incredibly accurate and comfortable.

The keyboard comes with backlight illumination, making it great for typing in any low-light condition, with multiple modes for adjusting the intensity of the backlight. At the center of the keyboard rests the iconic red TrackPoint, which makes navigation, highlighting text and clicking small icons precise. The fairly large 3.9 x 2.25-inch touchpad helps you glide through pages, makes precise gestures, scroll with ease and pinch-zoom over images as well.

The ThinkPad T450 reviewed (20bv0020au) is equipped with the Intel Core i5-5200U processor based on the Broadwell architecture which brings 5% more performance per MHz compared to the Haswell models. The Intel processor comes with a clock speed of 2.2GHz, which can be clocked up to 2.7GHz, thanks to the Turbo Boost technology. With no standalone GPU equipped with the model, the ThinkPad T450 comes with Intel HD 5500 Graphics, which is quite mediocre.

• Robust chassis that can survive dings and drops with ease.
• Brilliant backlit keyboard for an amazing typing experience.
• Low power consumption and fairly cool when used for longer duration.

• The TN display technology is outdated and offers a weak contrast ratio.
• The battery life if quite average.

Cutting corners may have worked for some in the past, but it definitely does not for the Lenovo ThinkPad T450. Lenovo does a fine job of offering build quality, one of the best keyboards on the market, and a decent budget hardware configuration, but the poor quality TN display takes everything down with it.