Toshiba Satellite Radius 11 is a budget-friendly mini convertible, that offers decent build quality and battery life, but a poor screen.

***Disclosure: As an Amazon associate I earn from Qualifying Purchases. 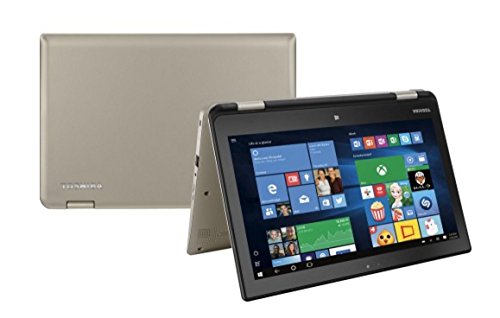 The Toshiba Satellite Radius 11 is a budget-friendly mini convertible notebook that has been designed in the image of its elder siblings, with rather modest performance hardware to make up for the competitive price. The latest version of the Satellite Radius 11 continues to be one of the very mini convertible notebooks that offer a decent amount of features in its price range. With an upgraded Pentium processor and the super-fast speeds of SSD storage, you can expect a lot from this mini convertible. Check out our full review below.

Unlike the larger variants of the Satellite Radius that are constructed with aluminium and plastic components, the Satellite Radius 11-B00L is entirely made out of plastic. Although the build material is not an issue, the glossy finish of the lid does attract fingerprints and smudges quite often.

The hinges are built for stability and do not vibrate under any mode, but the lack of any tab or cutout makes it difficult to lift the display with a single hand. The notebook weighs 1.3Kg, which makes it ideal to be carried around in tablet mode, and its relatively smaller footprints add to the overall portability of the laptop.

Similar to the other Satellite Radius convertibles, this notebook does not come with a maintenance hatch to access the components easily. In terms of Input/Output connectivity, the Satellite Radius 11 comes with a USB 2.0 port, a USB 3.0 port, an HDMI port, SD Card Reader, and dedicated volume and power keys designed to be used when it is in tablet mode.

The 11.6-inch display of the Satellite Radius 11 comes fitted with the TN panel technology, which is commonly used in the cheaper/affordable laptops segment. The native resolution of the screen is 1366 x 768 pixels, and the average brightness was measured to be 204 cd/m2. The low brightness looks even more mediocre under direct sunlight, as the screen does not come with a matte finish or anti-glare coating.

The TN display panels are not the best at reproducing high color accuracy and fall short in grey levels as well. With a contrast ratio of 640:1 and a DeltaE score of more than 10, the screen has an apparent bluish cast, which is significantly poor in comparison to the top-notch IPS display panel of the Asus Transformer Book. The viewing angles are the main concern, as the visual distortion is clear in tablet mode, with fading colors when the screen is viewed from shallow angles.

The size of the keys has been reduced to make sure that all the common keys are added to the Satellite Radius 11’s keyboard. The arrow keys are considerably smaller than regular laptops, while the alphabet keys provide short travel and the feedback level varies inaccuracy. The keyboard comes with no backlight either, although the subdued noise level is a positive aspect.

The touchpad of the notebook is considerably larger in comparison to the keyboard, measuring to be 8.5cm x 4.4cm. The matte surface of the touchpad is ideal for gliding, and accurately registers multi-touch gestures, two-finger scrolling, and the right and left clicks, which have been integrated into the touchpad itself.

The Toshiba Satellite Radius 11-B00L has been integrated with the Intel Pentium N3540 quad-core processor. The base clock speed of the processor is 2.16GHz, which can be overclocked to run at 2.66GHz with the Intel Turbo Boost technology. The notebook comes with 4GB DDR3 RAM memory, which is soldered to the motherboard and cannot be upgraded.

The RAM and processor combination itself is efficient enough to run most of the regular programs without a hiccup, but the storage drive is what makes the added optimization. Toshiba has elected to upgrade the Satellite Radius 11 with a 128GB SSD storage drive, which gives it the added speed boost to qualify as a modern notebook.

The Toshiba Satellite Radius 11 starts out as the perfect tablet replacement, which just a little extra weight, but plenty of firepowers to make up for it. The build quality is good if not excellent, the battery life is above average and the notebook feels almost identical to a tablet with the screen turned around.