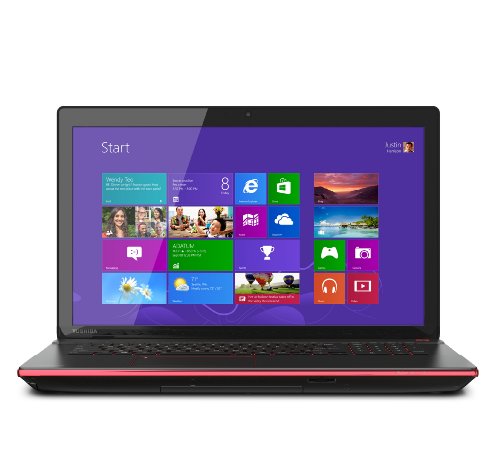 The Qosmio X75 is fairly close to the top of the heap performance with its 4th generation 2.4GHz Intel Core i7 – 4710MQ processor, the new GeForce GTX 770M GPU and 16GB of RAM.

Users don’t have any problem with their performance. Even heavy-duty video editing, Photoshop use or gaming won’t bring it down on its knees.

Whether you are watching playing a game or watching a movie, the laptop is able to automatically transition between NVIDIA graphics and Intel Integrated graphics seamlessly and in the background to ensure that everything runs smoothly.

In fact, it is a better rig than even the more-expensive Razer Blade 14. It is able to run BioShock Infinite at 1,920 x 1,080 resolution and very high detail settings and still hit 29.9 fps.

The gaming experience is further boosted by its large display that will make you feel part of the game.

The X75 uses an 8-Cell Li-Ion battery which comes in delivery. The battery lasts for 3.5 of continuous use.

On the video playback battery drain test it managed 1 hour and 45 minutes which is slightly longer than the X875.

The Razer Blade knocks 7 hours in the same test.

This machine has a 17.3” TruBrite display which is LED-backlit and has Full HD 1920 x 1080 resolution. It is not a touchscreen, though.

This is a serious omission since Windows 8’s tile-based UI is much easier to navigate with swipes and pinches on the screen.

But that’s not something to crucify the X75 for since all the gamer-targeted laptops we have seen this year do not offer touchscreen even those using Windows 8.

It seems there is a reluctance to marry touch screens with discrete GPUs. The screen is great, running games, playing HD video and displaying Web content well even from off-axis views. The only problem is that it is a bit glossy causing some glare.

It features a diamond-textured aluminium chassis with red accents that have been toned down a little bit compared to the X875.

Most users claim that its design betrays its internal components. They say the body feels a few years out of date. But if your concern is gaming and other functionalities then the design would not be a hindrance.

The Qosmio X75 boasts a frameless LED-backlit keyboard with a ten-key pad. This flat-topped keyboard offers a good typing experience though some users say the keys are a bit on the clacky side.

Toshiba laptops are known to have short spacebars which contribute to typing mistakes. In all, the keyboard looks great but it needs some improvement.

X75 offers a large clickpad-style touchpad with a small icon in the upper left corner which allows users to disable it when they have a mouse plugged in.

They just need to hold their fingers about an inch above the icon and tap it. The icon lights when the touchpad is disabled. The pad responds well and has a separate right and left mouse buttons.

The X75 has plenty of room for ports and connections. Thanks to its large size. It has an SD card reader, four USB 3.0 ports, dual video outputs, mic and headphone jacks, and a Blu-ray recordable drive.

It also has HDMI port for those who may want to connect to larger screens, Gigabit Ethernet, and support for Wi-Fi 802.11b/g/n and Bluetooth 4.0. For storage, you will get 1TB 5400rpm hard drive plus 256GB Solid State Drive.

Other things to consider

The Qosmio X75 comes with a 1-year unlimited warranty.

The machine has faster startup speeds because of its SSD boot drive plus a solid graphics card and CPU.

It has a large display with high resolution and wide viewing angles.
The HDMI and the VGA output are great. The Blu-ray optical drive is definitely a plus.

It has a bulky design and his battery life is short.
It lacks new features such as Thunderbolt, touchscreen, and DisplayPort.
The fan exhaust is at an inconvenient place,
The drivers may not work as expected and the power adapter is bulky and tricky to connect. Windows 8

The Toshiba Qosmio X75 laptop screams power and performance, but users are so much concerned that its design looks and feels out of date.

Internally, it packs a fast CPU, a powerful GPU, and a large hard drive. The device has a huge Full HD display plus some high-end entertainment features and hardware that will excite hardcore gamers.

The massive dual-drive storage and the quad memory slots provide enough room that they need to store their graphics-intensive content.

Good sound quality is rendered by the Harman Kardon speakers that make the gaming experience quite immersive.

The Qosmio X75 offers a compelling set of internal components at a price that is reasonable for a gaming laptop.

The design is stuck in the past, though. The lack of touch screen is also a concern to some users.

But even with these shortcomings, the X75 beats many of its competitor’s hands down.